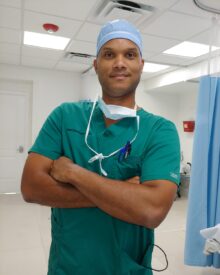 Dr Brewster’s goal is to deliver the most compassionate and effective cosmetic and
gynecological care. Dr Earl Mark Brewster Jr MD FACOG earned his medical degree at the University of the West Indies, Mona. Since his graduation he has completed fellowships in both cosmetic surgery as well minimally invasive gynecology. His drive for excellence in medical training hails from being raised in a medical family and entered medical school at the age of 19. He entered residency in Obstetrics and Gynecology in
2007 at Morehouse School of Medicine, a highly sought after training institution. It was here that
he received many awards and accolades, most notable the “top hands’ ‘ award and placed first
in several CREOG exams. He is a rounded academic having published several papers and
given several podium presentations. He was awarded the fellowship of the American Board of
Obstetrics and Gynecology in 2014.
His keen interest in cancer care and advanced pelvic reconstruction as well as minimal invasive
surgery led him to complete a Gynecology fellowship in advanced pelvic surgery and robotic
surgical at the Augusta University, Georgia in 2015 in which he worked intimately with
Gynecological Oncologists at this institution.
His interests in developing new reconstructive techniques lead him to cosmetic or aesthetic
surgery. He gained entry into the highly competitive American Academy of Cosmetic surgery
general fellowship program. During this period he honed his skills in body and facial contouring procedures as well as in the gentalia area by completing a mammoth 1,000 plus aesthetic procedures during this time. Since
that time he has completed well over 8,000 procedures and continues to practise in Miami. He has been awarded a Real self top contributor and his reviews speak volumes for his patient care. Please visit 305plasticsurgery.com for further details on how to book appointments. He also accepts care credit, please go to the care credit website for further details.

Liposuction of the torso, lateral, back, chin, arms and inner thigh

Abdominoplasty with and without muscle repair

American Board of Obstetrics and Gynecology