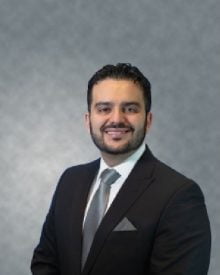 As a passionate physician and surgeon, Dr. Kamran Dastoury has dedicated his practice to the art of cosmetic surgery. He attained fellowship training after residency, in comprehensive facial & body cosmetic surgery in Southern California.

He originally grew up in the Los Angeles area, where he also received his graduate degree from University of Southern California. In the beautiful city of New Orleans he attended LSU School of Medicine and received his medical degree. Dr. Dastoury also completed his general surgery internship at ILH Charity hospital, a Level I trauma hospital located in downtown New Orleans.

Dr. Dastoury went on to completed 6 years of surgical specialty training in Facial Reconstruction & Cosmetic Surgery at University Hospital in New Orleans. Other areas of his residency training included treating facial trauma, head & neck cancer, microvascular reconstruction, and pediatric craniofacial surgery. During his residency, he also had extensive training in anesthesia, which enabled him to attain his general anesthesia certificate in California and Colorado.

After discovering his passion for aesthetic surgery, Dr. Dastoury pursued further subspecialty training in facial & body cosmetic surgery in order to provide the best aesthetic care for his patients. He completed another full year in general cosmetic surgery through the American Academy of Cosmetic Surgery fellowship program in Southern California under direct mentorship of Dr. Jacob Haiavy, MD, past president of American Board of Cosmetic Surgery.

Some of his favorite cosmetic surgery procedures include liposuction and body sculpting, facelifts, rhinoplasty, eyelid surgery, necklift, jawline contouring. He enjoys listening to his patients’ concerns and formulating customized comprehensive options of treatment to meet their aesthetic needs. He enjoys being an active member in the Academy of Cosmetic Surgery. He also enjoys discovering the outdoor activities in Colorado area such as boating and hiking. He is newly enthusiastic about his newly discovered hobby of sculpting.

Dr. Dastoury grew up in the Los Angeles area and earned his graduate degree from the University of Southern California. He then pursued his medical degree at Louisiana State University (LSU), School of Medicine. He completed his general surgery internship and six-year residency in Maxillofacial Surgery at the ILH Charity Hospital (Level I trauma hospital) in New Orleans.

His passion for cosmetic surgery led him into the American Academy of Cosmetic Surgery, where he completed a full year of focused surgical training during his cosmetic surgery fellowship program in facial and body cosmetic surgery in Southern California. He then went into private practice in Los Angeles area, operating out of Beverly Hills Ambulatory Surgery Center and Surgical Arts of Inland Empire before moving to Denver in 2018.

Dr. Dastoury has had extensive training in these areas:

Once he found his passion for cosmetic surgery, Dr. Dastoury pursued education and training in all areas of the field. He’s also been a motivated researcher in cosmetic surgery. His poster presentation at the 2014 AAMOS annual meeting in Hawaii was published in the Journal of Oral and Maxillofacial Surgery. Dr. Dastoury was presented with the Resident Research Award at the 2014 conference as well.

Dr. Dastoury has continued his research and delivered a live webinar for the American Academy of Cosmetic Surgery on, Sublabial Approach to the Septum in Cosmetic Rhinoplasty, in 2017.

Award for Leadership Skills, USC Doctors Out To Care