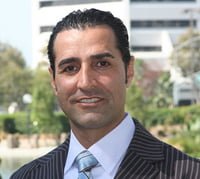 Dr. Kevin Sadati is a highly specialized and experienced surgeon who has performed thousands of cosmetic and reconstructive procedures throughout his career. As a surgeon, he has great experience with modern techniques of cosmetic and plastic surgery and as an artist and painter; he has great understanding of the hidden beauty of each individual. Dr. Sadati believes cosmetic surgery is an art form that makes one look and feel better. He also strongly believes that the goal of cosmetic surgery on face and body should be a look that feels and appears natural, and is in harmony with the rest of the body without having an “operated-on” look. He has written many scientific papers. His well-known research paper regarding free fat transfer with PRP was published in the American Journal of Cosmetic Surgery. His paper received the best scholarly manuscript research paper award in 2006 in the American Academy of Cosmetic Scientific meeting.

Dr. Sadati received scholarship to earn his undergraduate degrees in Molecular Cell Biology and Near Eastern Art & History from the University of California at Berkeley. Then he became involved in wound healing research at the University of California at San Francisco. He then went on to earn his medical degree from Midwestern University in Illinois. After completing his rotating internship at Michigan State University, Metropolitan hospital, he continued his General Surgery, Otolaryngology/ Head & Neck Surgery at PCOM and Medical College of Pennsylvania in Philadelphia. He also completed his facial plastic & reconstructive training in Philadelphia.
In his quest for a higher education, he also attended fellowship training in general cosmetic & reconstructive surgery in Seattle, Washington, accredited by the American Academy of Cosmetic Surgery.
While a resident, he had pursued an interest in art and had attended evening art classes at the Philadelphia School of Fine Arts. He studied oil painting and sculpting and profited enormously in his understanding of human forms. This artistic training has given him what we considered to be a unique tool and technique to better understand a balanced body harmony and its clinical application at surgery.

A Reliable Technique for Lower Facial Rejuvenation: Review of 1500 Cases.

The American Journal of Cosmetic Surgery 12/2006

Histological and surgical evaluation of this rare disease in head and neck cancer. Published in ENT journal April 2004.

Presented at the AOCOOS meeting.

Development of an algorithm to reduce the incidence of CSF leak after acoustic neuroma surgery.

These studies were based on analysis of 500 surgical patients chart, as well as literature search. These data were compiled into charts, graphs, and lecture material that were presented in Copenhagen Neurotological Convention by Dr. Richard Wiet.